For the eclipse of April 14/15, 2014, I wanted to depict the course of the eclipse across the sky with some recognizable landscape features in the foreground to anchor the composition. As the day of the eclipse went by, I watched the weather reports and decided Joshua Tree National Park would be a good place to shoot, since it was forecast to have clear skies. I have been shooting various spots in JTNP at night in an effort to produce a collection of nice landscape astrophotography images. I knew two locations in particular had orientations that would work well for the eclipse, which was going to occur almost due south. In 2011, Garry McCarthy and I shot original compositions at Arch Rock and the Juniper and Standing Rock incorporating the milky way, at the time something fairly new. Similar images have become fairly common, and the arch will now often have a crowd of photographers at night around the new moon. But since the next time a full lunar eclipse will occur centered due south is decades away, I knew this eclipse offered an opportunity to produce an astrophotography image at each of these well-known spots that was not likely to be appear in any other photographer’s portfolio anytime soon.

This is the third of the three images I made that night, with the lunar eclipse depicted from the point in time when the moon entered the shadow of the Earth to when it emerged again, above the small juniper tree and curious standing rock not far from one of the campgrounds in Joshua Tree National Park. 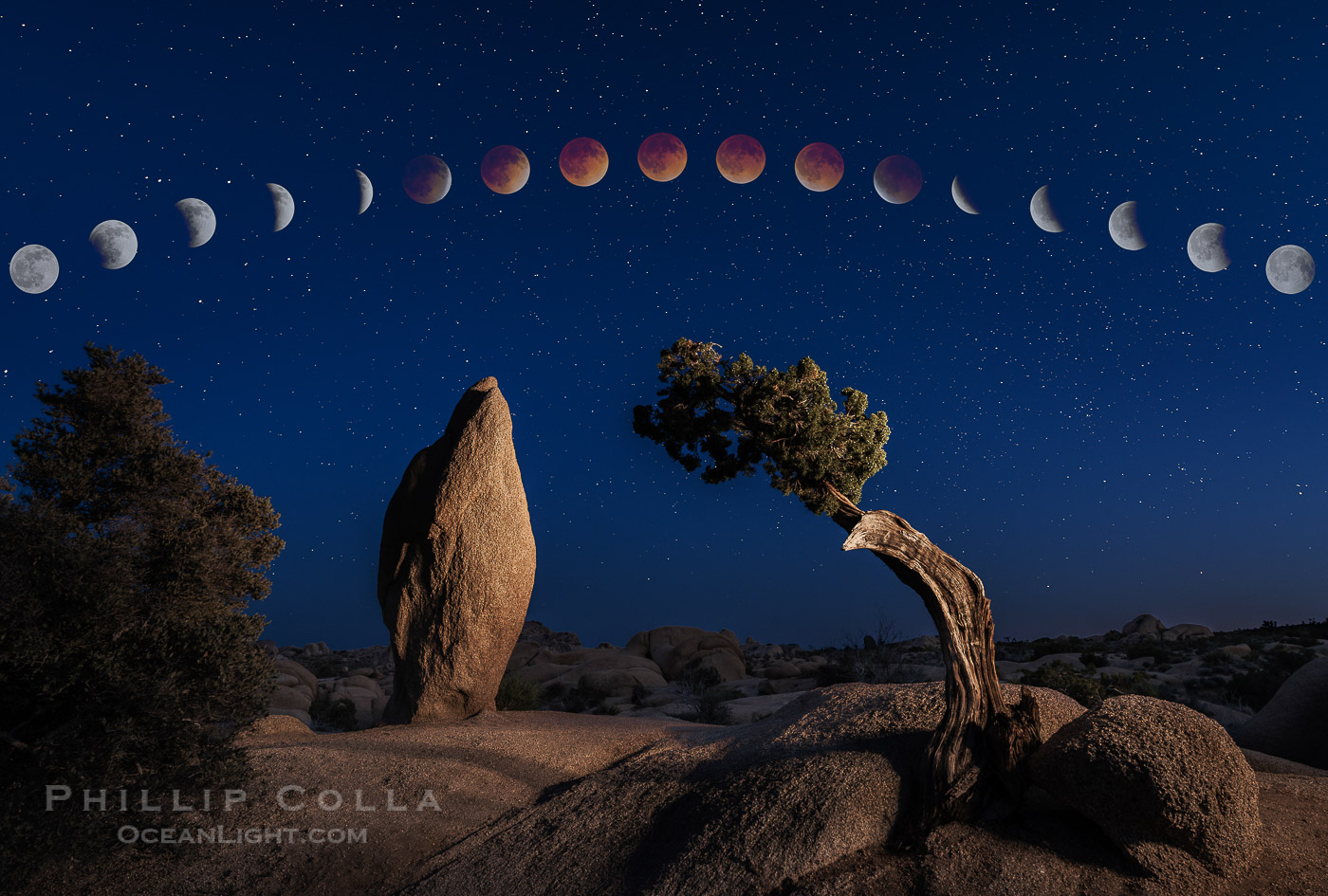 This is the third of the three images I made that night, with the lunar eclipse depicted from the point in time when the moon entered the shadow of the Earth to when it emerged again, above the small juniper tree and curious standing rock not far from one of the campgrounds in Joshua Tree National Park.

If you are curious, the other two images I photographed during the eclipse are Lunar Eclipse Sequence over Arch Rock, Joshua Tree National Park, April 2014 and Lunar Eclipse Blood Red Moon Sequence over Joshua Tree National Park. The second link explains the planning involved and how I executed the eclipse sequence — I used largely the same camera technique at all three locations but the artificial lighting was different in each, exploiting both hand held light and remote triggered flash depending on what was needed. (The arch rock composition differs from the other two in that not only is it a composite but it is a very wide panorama as well.)

This image is centered due south, which was the point during the eclipse when the moon would be both fully eclipsed and highest in the sky. I lit the juniper and rock with a small handheld light from the right. This image is a composite and the moon is a larger than it appeared to the eye. The moon was exposed separately from the stars in order to control for the fact it was much brighter than the stars and to better present the detail and color of the moon itself. The stars themselves were photographed earlier in the evening, when the full moon was just rising, so that it could illuminate the surrounding landscape not reached by my flashlight. My camera remained fixed on a tripod throughout to ensure the images were aligned perfectly and the moon tracked through the sky in the proper way.

Cheers, and thanks for looking!